May the Forest Be With You… (T-Fox)

“Any portion of the earth’s surface, left unpaved and alive, is infinitely rich in details and relationships, in wonder, beauty, mystery, comprehensible only in part.”
– Edward Abbey

“Let’s pounce!” exclaims The Fox. Another beautiful day of magical views and copious opportunities to explore!

By mid-morning, we came across Theilsen Peak – what a rugged mountain! And the way the sun was hitting it just right…truly breathtaking. The trail never ceases to amaze us, keeping us on our toes with unexpected views and findings. What an adventure.

But my feet hurt. A LOT. I thought the new shoes would elevate the discomfort, but I was mistaken. We’ve been pounding miles lately, and it seems that no matter how gentle the terrain is (which it varies throughout Oregon), my feet scream. I hope this is temporary. It’s always a little unsettling when the body protests. I may be comfortable cranking higher miles, but we still need to be careful.

Nearing the end of the day, we had a decision to make – continue on the PCT, or take a 110 year old alternate trail called The Oregon Skyline Trail. The miles were a bit shorter on the Skyline and it had less elevation gain, so we opted for that one. Also, the water has been dry in this area of the PCT, and the alternate trail was teeming with lakes. Everyone has their own goals and views on what hiking the PCT means to them, and for us, we just want to make sure we hike every step from the Mexican border to the Canadian border. If an alternate route is more scenic or has appeal to us, we’ll take it. 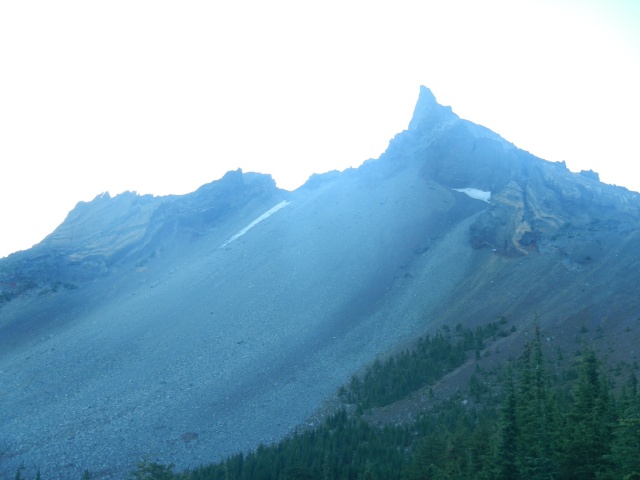 The Skyline Trail was really nice, and there were lots of people riding on horses!! Man I miss riding.

Today we entered Diamond Lake Wilderness – a lush, green Forest, teeming with life! We’re not sure if it was the impending rain, but it just felt “wetter” here…it reminded us of west coast British Columbia – home sweet home. The trees were covered in Old Man’s Beard (at least that’s what we call it in BC), which is a green (sometimes brown) mossy lichen. It was everywhere! It even managed to make it’s way onto our faces, or maybe we just placed it there…?

FEET. ARE. KILLING. ME. I hate to say it, but I am currently a heavy-user of Vitamin-I, more commonly known as ibuprofen. Sigh.

Only 18 miles to Shelter Cove for a food resupply! Approximately 2 miles shy of the resort, the rain started coming down pretty hard. It has been so hot lately, and we could feel a storm coming on. It’s funny how welcome we were of the rain. When you hike everyday in the humid, sticky air, a little rain feels great! We quickened our pace a bit, but secretly (or not so secretly) enjoyed the “shower.”

Shelter Cove had the most delicious coffee I have had in a while (full espresso bar!), and Lorax got a sausage on a bun with all the fixings. I had the shortest shower ever (dang coin showers), and we sorted through our food for the next lag of our journey. In our true fashion, we camped away from the resort. Our trail book suggested camping by the train tracks, which I found odd, being as there were trains running throughout the day. Lorax assured me that it would not be recommended if trains went all night. Oh right…of course not. Silly fox!

Trains went ALL NIGHT. Hardly slept a wink. Lorax swears he only heard two trains, while I counted more like eight. Why can’t I sleep like that?

So I was tired. So very tired. Sleep is such delicate thing out here – we NEED enough of it; it makes or breaks the hike.

So I broke. And cried. And struggled. And complained. But ultimately, kept hiking.

Needless to say, it was a short day. We had planned on pushing another 5 miles, but a huge storm was brewing. The clouds were churning, and expressing their displeasure and irritation with faint, but increasingly loud thunderous booms.

We needed to seek shelter. We set up camp by a lake at around 5pm, an embarrassingly early quit time. I’m glad we did though! Moments after Lorax set up the tent, and had a three minute swim, the rain POURED. I mean torrential downpour.

The rain turned to hail…relentless hail. I’m so glad we were in our tent! When nature takes a turn like that, it’s really rather humbling. All that power and strength and magnificence, and here I am huddled in a nylon home.

Mother Nature eventually finished venting whatever it was she needed to get off her chest, and the skies calmed. The Forest had an increase in vibrancy in her colours…characteristic of a good “drink.” 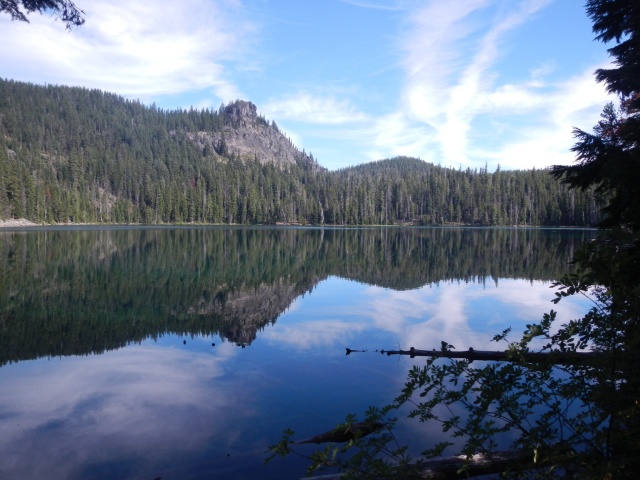 Hail outside our tent

Let’s start off the day with some decapitated trees! The PCT takes us to unforeseen places, with plenty of surprises…and today she brought us to another old fire zone. Obviously forest fires are sad, but they are also beautiful. It’s great to see nature growing back, with new life maximizing and thriving.

Today we entered Three Sisters Wilderness. We could see the South Sister off in the distance – the first of three peaks in the park.

Holy Mosquitos! skeets, skeets, everywhere skeets! We were going a little batty. I thought the bugs would be over by now, but apparently this area got a fair amount of snow last winter, and the melt was later, and that equals a delayed Mosquito season. Too bad for us. Load on the DEET!

So I listen to podcasts on the trail – ranging from educational to entertaining. My supply was low, and I have been struggling through these last couple of days. As I mentioned, my feet have been hurting, and one way that I cope is to put my head down and zone out with my podcasts. So Lorax decided he would hike an extra 3 miles off trail to Elk Lake Resort where he could use the wifi to download me some episodes. MY HERO.

I walked 1.5 miles by myself on the PCT, set up the tent, and waited for his return. He rolled in sometime around 9pm.

It took me half an hour. Lorax does it in under 5 minutes. But in my defence, we have a weird tarp tent that is oddly shaped, and needs to be set up “just so.” So I fiddled, and adjusted, and repositioned until I was satisfied.

Lorax was happy with my work, and suggested that I set up The Den from now on.
We’ll see… (It’s been 6 days, and I haven’t set it up since. He’s so much better at it!)

August?! Wow. Time flies when you’re having a ball. At the beginning of this trek, everything seemed so daunting, and four to five months of walking seemed unheard of. Now that it’s coming closer to completion, I just want time to slow down…has anyone figured out how to do that yet?

It rained a lot this morning.

We had planned a 30 mile say to get to the town of Sisters today. We didn’t quite make it. The terrain was tougher than expected, with lots of ascents and descents…but man was it gorgeous! The lava flows are just spectacular. I love to imagine that the rocks are still pliable, piping hot, and snaking their way around the land, slowly cooling and forming deep impressions in the earth. It’s hard to picture actually…the earth literally on the move…it’s almost unsettling. These volcanos are dormant right…?

We are officially in Three Sisters Wilderness! I am LOVING Oregon…these prominent volcanic mountains are just stunning. 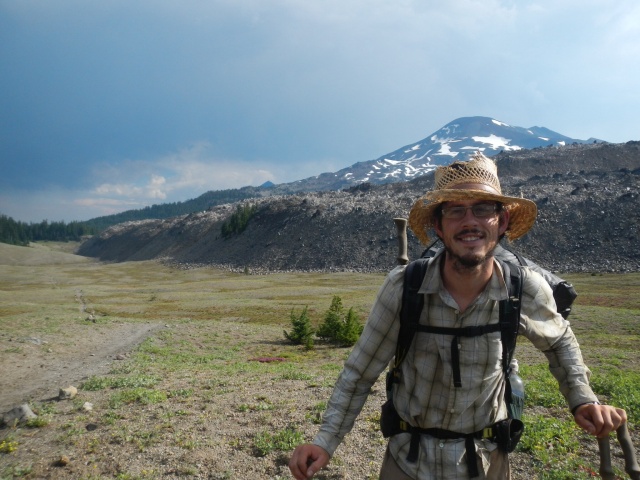 Lorax and the south sister 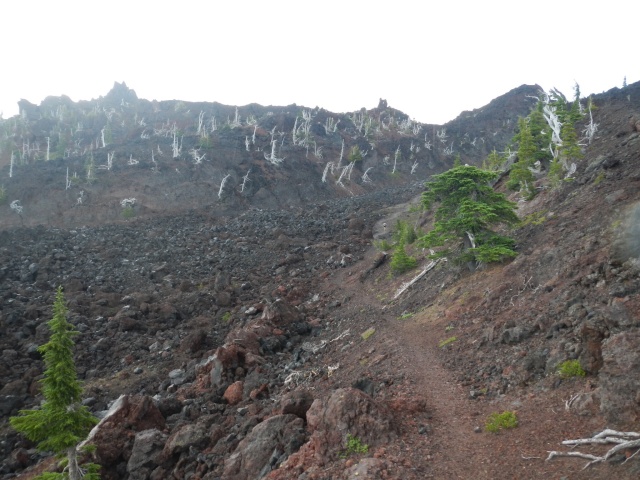 Just four miles to make it to the road, then we hitch to Sisters. We don’t need anything at all, but are craving a good, hearty breaky.

We reach the road, and there are NO CARS. Zip. Two cars finally come at us, heading the other way, which at least gives us hope that people actually use this road. The second car waves at us enthusiastically, then pulls a U-turn. Turns out they are heading into Three Sisters too, but they forgot their poles! When they saw us with poles, they remembered! They invited us into the car, as they had to head back home. Lucky for us!

Hitching back to the trail went well. A guy (I forge his name! ) picked us up who hiked the PCT 8 years ago. We swapped trail stories and generally shared the stoke for trail life. He was heading into Three Sisters to summit the middle sister with some friends. Lorax wants to come back and bag some summits, since the PCT doesn’t run up summits, but takes “the easy way.” Maybe someday Hun.

By the end of the day, we reached the 2000 mile marker. I happened to be in a fowl mood (sorry folks…I sometimes get grumpy after several hours of walking along hot stones all day), so I wasn’t feeling particularly celebratory. Instead of standing at the marker to contemplate 2000 miles, I decided to do so in. The comfort of my sleeping bag that evening.

Laying in bed, thinking back on all that we’ve accomplished and learned, I started to cry. Sad tears because I don’t want it to end, but happy tears because I know that this adventure is just one of the many more that we will have. I honestly think that we will never be the same after this journey. How could you embark on a trek like this and not be changed? My goal is to be as impressionable as I can – to allow this journey, while relatively short, to shape and mould me.

This entry was posted in Uncategorized. Bookmark the permalink.

3 Responses to May the Forest Be With You… (T-Fox)